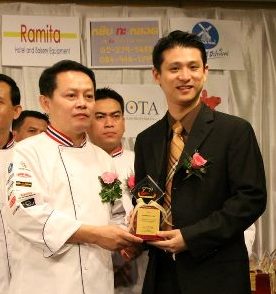 As the bakery market was growing, we decided to open our wholesale and retail bakery supply store "BakeryLand" to serve our various groups of customers: corperates, professionals, and amateurs. Giving our customers the convenient one-stop shopping, BakeryLand stores have been supplying Packagings, Tools, and Ingredients under the concept of "Trendy and Complete at the Wholesale Price". Besides, we also provide excellent services such as friendly staff, bakery workshop, baking recipes, nationwide delivery, and effective customer database. 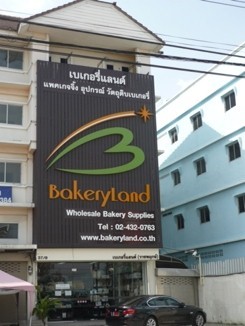 February 2010: Siam Bakeryland Co., Ltd. was founded initially to import "food grade" bakery packaging such as boxes, baking cups and cake boards which became a tread setter in Thailand's bakery market.
July 2010: The first "BakeryLand" store was established in the Town in Town area to serve as a showroom for our authorized distributorship brands and our own BakeryLand Products. BakeryLand was the unique, modern and trendsetter bakery supply store carrying both imported and dpmestic packagings, tools and ingredients. Free Mini Workshop was an activity frequently given to our customers to bring them an inspiration about baking and bakery trend.
April 2011: Siam Bakeryland Co., Ltd. became the sole authorized distributor of I Chin Package, Taiwan's large "food grade" bakery packaging company.
Septemper 2011: Siam Bakeryland Co., Ltd. received an award from Thai Bakery Association as the supporter of thai society and association".
November 2011: Appointed by CK Products (USA) as a global partner of CK Products in Thailand.
January 2012: Appointed by Wilton Industries Inc. (USA) as a global partner of Wilton brand in Thailand.
May 2012: Appointed by Knightsbridge PME (United Kingdom) as a global partner of PME Sugarcrafts and JEM Cutters in Thailand.
June 2012: BakeryLand's 2nd store was opened to cover the west side for Bangkok: Thonburi Area. Located in Ratchaphruek Street, the store became the most modern, trendy and complete bakery supply store in that area.
July 2012: "The 3-Pound Cooler Bag" was initially manufactured and sold under BakeryLand Products brand. The bag became a big hit among our customers according to its price and quality.
November 2012: Siam Bakeryland Co., Ltd. recieved an award as "The supporter of Food Carnival 2012" from Her Royal Highness Princess Soamsavali.
April 2013: Appointed by August Thomsen Corp. (USA) as a global partner of ATECO brand in Thailand.
May 2013: Appointed by Filter Media Manufacture Limited (United Kingdom) as a global partner of FMM brand in Thailand.
July 2013: Store Expansion at Sriwara Town in Town a twice as much space to serve an increasing number of customers and the product line extnsion which was up to 5,000 items.
January 2014: Penetrating the new territory, BakeryLand was opened the 3rd branch on Srinakarindra street to provide a better service to customers who resided around Srinakarindra Area and Bangna-Trad Area, even such adjacent provinces as Samutprakarn and Chonburi.
March 2014: BakeryLand was invited to be on TV program called "SME IDOL" as an inspirational idol for young entrepreneurs.
July 2014: Appointed by Pavoni Italia (Italy) as a global partner of Pavoni brand in Thailand.
December 2014: Siam Bakeryland Co., Ltd. joined Thai Bakery Association to organize the celebration ceremony om His Majesty the King's 87th Birthday at the Royal Plaza (Sanam Luang)
July 2015: BakeryLand was invited to the TV program (MCOT) called "Young Self Made Millionaire" to build the inspiration among Thailand's new generation.
September 2015: BakeryLand's 4th branch was opened in the heart of Bangkok at Samyan-MBK (Suanluang Square Community Mall) near Siam Square area. Our new branch located on Chulalongkorn 12 street behind the national stadium. With a bigger space, this modernized branch provides our customers with fully equipped workshop room.
May 2017: BakeryLand was invited to the TV program (Channel 3 SD) called "The Spyman Show" to build the inspiration among Thailand's new generation.

Aug 2019 :  BakeryLand got an award "Executive of the year 2019" which is highly honor to get this award

Jan 2020 : BakeryLand got two awards which are "Best Practice Awards 2020" and "Person of the Year 2020" which is highly honor to get this award